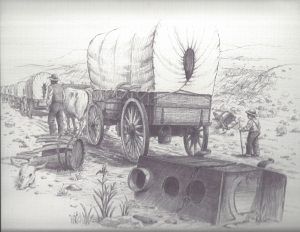 Just how big is your dream?

What are you willing to leave behind to make it happen?

What will you keep?

What new resources, attitudes, aptitudes, friendships and…will you need to make it all happen?

Seems like lots of folks are wrestling with big dreams these days.  Dreaming is easy and free.  But, moving to action can be costly.  The very skills and attitudes which get you to a certain place in life, perhaps where you’re at now, don’t always work in the next phase.  Consider the picture.  These pioneers set out on the trail with a perfect picture of what their life would be once their dream was fulfilled.  But, they forgot to take true stock of the cost.

The Oregon Trail is littered with the remnants of dreams like the stove and broken barrel in this picture.  However, along the way, the pioneers took on new skills.  Cooking over open fire.  Learning how to tell when a water source is safe.  And so much more.  We know many did achieve their dreams.  The way was hard.  The price was great.  But, the reward was even greater.

What’s your dream?  For many years a placard hung in my office which read, “Blessed are those who dream dreams and are willing to pay the price to make them come true.”  Eventually the placard wore out from too many moves.  And yet the saying is emblazoned in my being.

What’s your dream?  Are you willing to pay the price?  A much admired friend of mine gave up many of the perks of being a world class athlete to pursue a career which would bring greater financial stability to his family and a bigger stage for his many gifts of working with others and helping shape their dreams.  In the beginning, the way was hard.  Clients were few.  There were a number of nights only one or two people watched his Facebook talks.  But then those few became a bit more.  Followed by a bit more still.  And now?  He’s on his way to his dream.  By leaving a few things behind, bringing the true character of who he is with him, and being open to whatever new resources, attitudes, aptitudes, friendships, and so on he needs for the journey ahead.

Blessed are those who dream dreams…

If you ever want to talk about your dreams, I’m here, ready and waiting.  In the meantime, dream BIG!

Posted in Announcement
FEAR to FREEDOM →